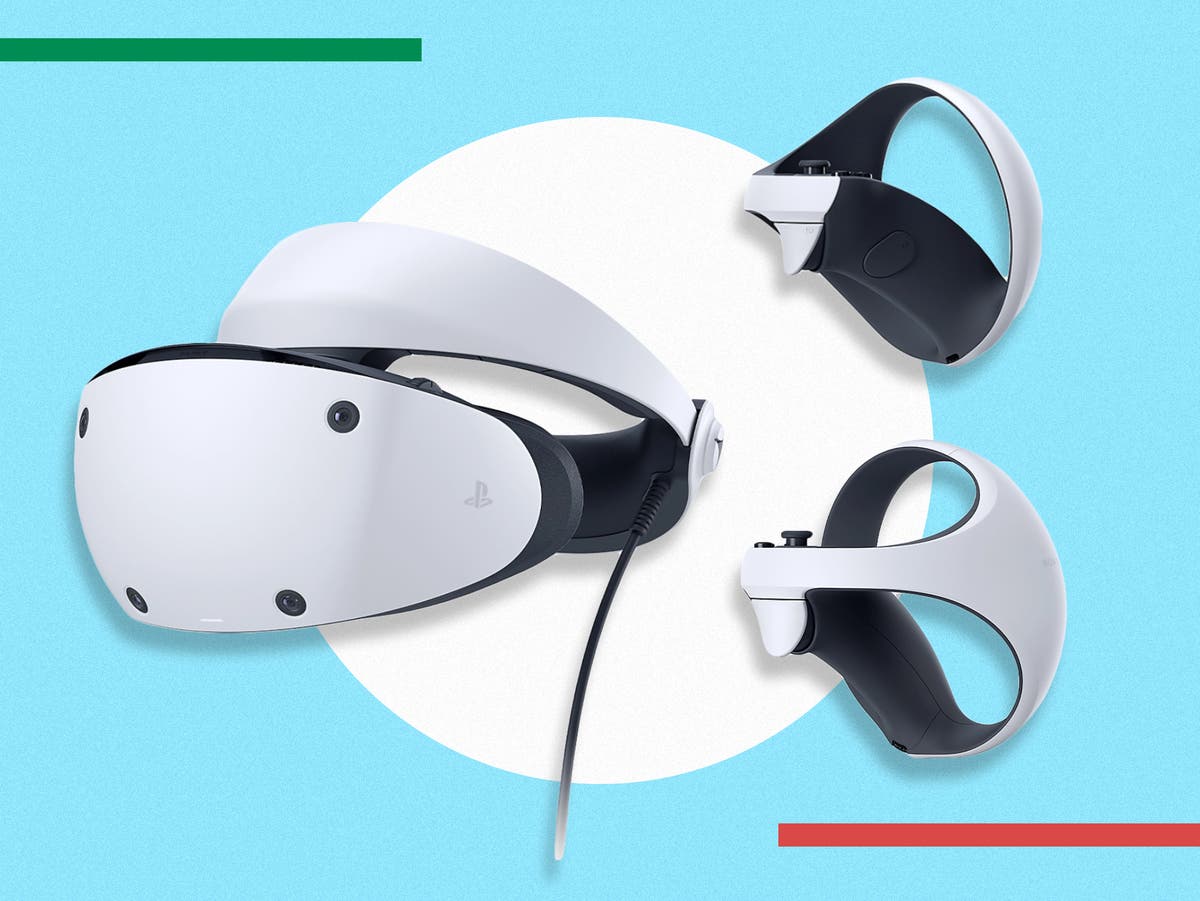 Sony has a next-generation virtual reality headset on the way, designed to work exclusively with the PS5 and called the PlayStation VR2. Now, the company has officially revealed when we can expect to see its next headset – via its social media accounts and a brand new TV trailer showcasing some of its games and features.

Although Sony announced it was working on the headset last year, it only confirmed the product name on 4 January, at the annual CES technology show in Las Vegas. Itis currently scheduled to be released in early 2023.

The headset is the successor to the original PS VR, which landed in October 2016 and was the first (and remains the only) virtual reality headset for a mainstream game console.

Most other headsets work with gaming computers, smartphones or are self-contained with their own processor and power supply. Microsoft has not yet shown an interest in making a rival VR product for its Xbox console.

Sony has already revealed what the new headset will look like, complete with updated specs. We also know Sony plans to launch 20 games for the new hardware upon its imminent release. Here is everything else we know so far…

A new trailer was released on 21 September 2022 with new details around PlayStation’s upcoming hardware.

Titled “Feel a new real”, the trailer highlights several anticipated features, and includes snippets of gameplay from some titles that have already been announced for the headset, including Horizon Call of the Mountain, Firewall Ultra, and Resident Evil Village.

The features in question include haptic feedback through the headset itself, adaptive triggers (much like those featured on the dualsense controller) and “foveated rendering”, which tracks the user’s eye position.

PlayStation has officially announced the headset is expected to be launched some time in early 2023.

There’s been plenty of speculation around the exact date, but as it’s been slated for an “early” release, we would expect the headset to be launched sometime between January and March. Games such as the Resident Evil 4 remake have already confirmed support for the headset, and, as that title has a confirmed release date of 24 March 2022, we imagine the headset could be released at a similar time.

This gives Sony time to finish the hardware, for developers to produce VR games for it, and for the ongoing PS5 production bottlenecks and supply shortages to finally subside. We suspect Sony is planning to reveal more information about the headset, games, price and official release date in one of its State of Play events.

In a recent PlayStation Blog post, the company announced that developers would be able to get their hands on the “the latest user experience for PS VR2” in a new system software release as part of the hardware’s ongoing development.

“There are lots of exciting things to look forward to for PS VR2, and we can’t wait to share more details about our next-generation virtual reality headset that takes a dramatic leap forward in gameplay innovation.” The post continued. “We’ll share more information soon, including launch date and additional games coming to the platform.”

The price is also something Sony is keeping secret for now, but we can take an educated guess. Given the original PS VR landed at a retail price of £349, we’re expecting a similar price point for the new version. This would also put it at a competitive price to similar headsets, such as the Meta Quest 2 (£399, Amazon.co.uk).

This is a fairly high price for a game console accessory, but the PS VR has been a success (at least by VR standards) and is often available at a discounted rate, or as part of a bundle with several games included. For example, it can currently be bought as a bundle with the VR Worlds game (£169.99, Argos.co.uk) for comfortably below its original RRP.

On a recent PlayStation Blog post written by product manager Yasuo Takahashi, some new features were shared of what the PS VR2 set is capable of, and there are some seriously impressive new features.

One of the most notable is the “see-through” view, which enables users to see their surroundings without removing the headset, thanks to front-facing cameras. The post said, “Users can press the function button on the headset, or use the card in the control center, to switch between viewing your surroundings or viewing the contents of the PS VR2.”

Another touted feature is the “customised play area”, that will enable users to scan the room they are in to tailor the available space to move within the environment. When users get too close to the border edges, a boundary will appear to warn players that they are close to the edge. It’s a feature we’ve seen on other VR headsets and should help players prone to bumping into walls and shin-high coffee tables.

Finally, PlayStation has created two distinct modes for different types of content: VR mode and cinematic mode. In VR Mode, players can experience a 360-degree view in a virtual environment. Content will be displayed in 4000 x 2040 HDR video format (2000 x 2040 per eye) with frame rates of 90Hz or 120Hz.

Sony says the PS VR2 has a 4K resolution, which translates to 2,000 x 2,040px per eye, and there’s HDR (high dynamic range) technology too, for improved contrast and brighter colours.

The headset uses an OLED display, so we’re hoping for the sort of vivid colours and deep blacks that the technology is known for. Additionally, the frame rates of 90Hz and 120Hz should make for smoother visuals. The field-of-view, a key metric when it comes to VR, is 110 degrees.

Read more: Everything you need to know about Pokémon Legends: Arceus

The PS VR2 has outwards-facing cameras on its exterior for inside-out tracking. VR headsets use this technology to map the wearer’s surroundings and help the virtual environment change realistically as they move their head, without the need for extra sensors placed around the room, as used to be the case with some VR systems.

Added to this, Sony is giving the PS VR2 eye-tracking tech, which will detect the motion of the gamer’s eyes, helping them explore and control a game by looking in specific directions.

Further sensor tech includes headset feedback, which Sony says “amplifies the sensations of in-game actions from the player. It’s created by a single built-in motor with vibrations that add an intelligent tactile element, bringing players closer to the gameplay experience.”

Read more: 20 best PS5 games for every kind of player, from Elden Ring to Stray

Sony is pushing haptic technology in a big way with the PS5. As well as the vibration motor of the VR2 headset, the dualsense gamepad (£59.99, Argos.co.uk) has haptic feedback and motorised triggers that can push back against the player’s fingers. Haptic feedback is also featured in the new sense controllers of the PS VR2 itself.

As well as confirming the name of the headset in January 2022, Sony also revealed how an original game, namely Horizon Call of the Mountain, is being developed specifically for the PS VR2. This will be the first of many next-generation VR titles coming to the PS5; as with the current PS VR, it is likely that some games will be entirely VR-based, while others will include an element of VR, but not rely entirely on the headset to function. Playstation fans were recently shown a trailer of Call of the Mountain in Playstation’s June State of Play.

Horizon Call of the Mountain’s product page on the PlayStation website also recently received a quiet update to the game’s description, giving players a much better idea of what to expect when the game launches with the headset.

The description reads: “Enter a living, breathing world of dangerous machines, tribal lore, exciting quests and new and returning characters. Explore a diverse landscape – embark on a journey with multiple paths to take where you’ll have to look all around you to uncover the secrets of the mountains.”

While it’s unlikely that the game will be fully open like Horizon Forbidden West, this certainly suggests the game has a much larger scope than anticipated.

A few other PS VR2 compatible games were also announced at the State of Play event, such as a virtual reality version of Capcom’s Resident Evil 8 and the upcoming Resident Evil 4 remake.

During a recent business briefing at Sony in late May 2022, the company gave more details about its planned software releases for the new headset. A slide from the presentation has shown that the company plans to launch the PS VR2 with over 20 games.

This will include a mix of first-party and third-party titles, according to Sony. One game that we are aware will be making its way to the platform is Among Us VR,a virtual reality version of the hit murder mystery game from developer Inner Sloth.

While the developer didn’t say when the game would launch on PS VR2, it did say it would be available “when the headset releases”, meaning that this is likely to be one of the 20+ titles we’ll see when the PS VR2 eventually launches.

As for the current PS VR system (which works with both the PS4 and PS5 consoles), titles featured in our 2021 rundown of the best virtual reality games across all platforms include The Room VR (£24.99, Playstation.com), which our reviewer described as “a supremely satisfying experience.”

Our tester also rated Beat Saber (£24.99, Playstation.com), as well as The Elder Scrolls V: Skyrim VR (£16.18, Amazon.co.uk) and Star Trek: Bridge Crew (£15.79, Amazon.co.uk). They are all available for the current model of PS VR. It’s been confirmed the PS VR2 won’t be backwards compatible with previously released titles for the headset, so it’s likely we’ll see ports of the most popular ones being released.

The PS VR2 and Meta quest 2 (£399, Amazon.co.uk) are set to be quite different takes on virtual reality gaming. Where the former will only work when connected to a PS5 console, the latter is a self-contained system that can be enjoyed on its own, with just the headset and a controller. The Oculus can be connected to a PC for access to the company’s Rift games but is mostly intended to be used on its own.

This is significant. While PS5 gamers would usually prefer a fully wireless VR experience, as offered by Oculus, Sony is betting on the huge power of the PlayStation 5 more than compensating for its need to be tethered to the PS VR2 headset. Mercifully, it’s a simpler setup than with the original PS VR, thanks to just a single USB-C cable connecting the new headset to the PS5 console.

Of course, this also means battery life is no concern for the PS VR2, as power and huge amounts of high-speed data can be carried by USB-C cables. Steering away from a battery-powered, wireless VR headset should also help keep costs down – or rather, help Sony spend a greater proportion of the PS VR2’s cost on processing power, display technology and its unique haptic feedback system. Those key points should help push the PlayStation headset into a sector of the market beyond the less powerful Oculus.

Both headsets have cameras to map the wearer’s environment and offer a VR experience with no need for external sensors, and both work with a set of purpose-built hand controllers.

As for specifications, the PS VR2 has a slightly higher resolution at 2,000 x 2,040px per eye, compared to 1,832 x 1,920 for the Oculus quest 2. Both handsets can handle a refresh rate of 90Hz, but only the PS VR2 can stretch to 120Hz, which should make for smoother visuals. Both also have 3D audio the quest 2 is offered with 128GB or 256GB of storage, while the PS VR2 is unlikely to have any, owing to how it connects to the PS5 console instead of running games off its own processor.

For more on virtual reality, we’ve rounded up the 10 best VR headsets for truly immersive gaming